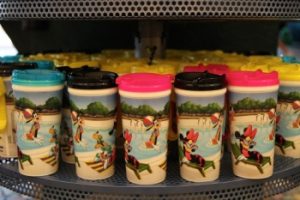 Will Disney use RFID chips to save money? One of the greatest debates among those looking for Disney deals revolves around refillable mugs at the Walt Disney World Resorts. Disney sells these mugs with the stipulation that you can only use them for the length of your stay. However, many people purchase them once and then bring them back year after year to continue to fill them for free. Disney has tried changing the mug graphics more frequently but visitors continue to use the old mugs.

No matter where visitors stand on the refillable mug debate, Disney is taking a definite stand by employing the use of RFID to limit refills. According to DIS Unplugged, Disney is testing new technology at its All Start Sports Resort. Drink dispensers will only dispense drinks into cups that have the appropriate RFID chips embedded. Single use cups will be timed for meal time and the refillable mugs will be timed for the length of stay at the resort of the purchaser. The technology is provided by ValidFill.

Over the last several years, Disney has been ramping up the use of RFID both in the parks and on their cruise ships. The new Disney Dream ship uses RFID in the room keys to allow visitors to tap a box on their doors to open them. They can also tap their keys when they have their pictures taken by cruise photographers to have them added to their room accounts. At Disneyland, RFID chips are being sewn into Cast Member costumes to allow for quicker changes and inventorying. Rumors continue to circulate about RFID being used in the coming years in the Disney World parks to better customize the visitor experience at attractions and rides.

Whether Disney is using RFID to cut costs, increase behind-the-scenes efficiency, or provide vacationers with a better trip, it apparent that Disney is getting both creative and aggressive with the RFID technology.